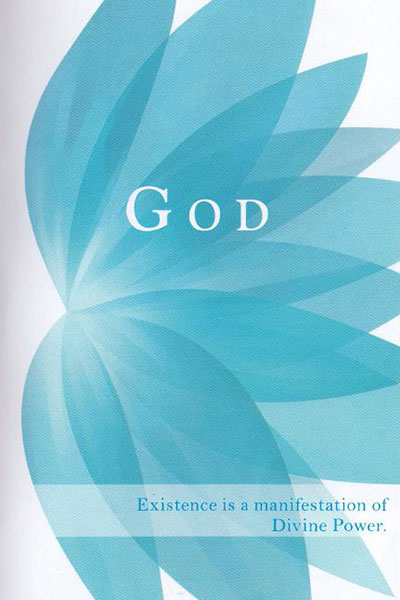 "If you look at yourself, your body is already the proof that there is a Universal Supreme God."

Whether we call out to the name of Allah , Brahman, Jesus, El Shaddai, Ra, Yahweh or Ahura Mazda, we intend to reach out to a reality greater than us, to a force many times more powerful than us and a point of origin that substantiates our being. It is not by chance that the synonyms of God are many and span across many languages. The perfection and balance in the entire universe seems to be characterized by an intentionality that cannot simply be passed off as the result of an accidental “big bang”. Who was it that said “let there be light”? Who is God? Does God have a gender or a form? These are questions that have been riddling mankind as we have pondered about the meaning of God since time immemorial.

It is interesting to note the similarity between what The Holy Bible and the Rig Veda say about the beginning of time:

“In the beginning was Brahman, with whom was the Word; and the Word was truly the Supreme Brahman.” (Rig Veda)

The Supreme Brahman or God was thus the point of creation, the alpha and the omega, the beginning and the end. The Bible says that God created man in his own image and breathed into him the breath of life. Does this imply that God literally looks like us? That is not so. The “image” here does not refer to the physical image at all. Instead, it refers to the fact that we are Godlike. We are all beings of Divine Power, Divine Love and Divine Intelligence.

While the identity of God is more than just an issue of faith, as Grand Master Choa Kok Sui stated, our own existence is evidence enough for the existence of God. Though God is different things to different people, the universality with regard to the presence of this Supreme Being serves as a point of similarity and shared belief among the many religions and faiths.

God is also, in many cultures, personified as an omnipotent, omniscient and omnipresent Holy Trinity. The Christian concept of the Father, the Son and the Holy Spirit is echoed not only in the Hindu ideal of Brahma, Vishnu and Maheshwar but also in the ancient Egyptian trinity of Osiris, Isis and Horus.

Master Choa Kok Sui believed that the Universal Supreme Being was one that went beyond the confines of religion. God may also be beyond our powers of comprehension and we might struggle to explain the existence of this Divinity, but do we not feel God every day? From the beauty of a rose, to the flawless functioning of our complex bodies, to the order in the universe, God is everywhere. Every breath you take is no less than a miracle of God. There are two ways of going through life: The first, to think that everything is a miracle; the second, to think that nothing is a miracle. Whether it is ignorance or obstinacy that keeps us from realizing God’s presence in everything, it truly is a wonder that “those who have eyes do not see”.

This course will help me open my blocked chakras and help me to be a better person overall and I want to help my family as well. Thankyou Shavarna for bringing this awareness to me.

Practises during the course helps you validate and gave me confidence. Thank you Master for the great teachings and techniques...!!!