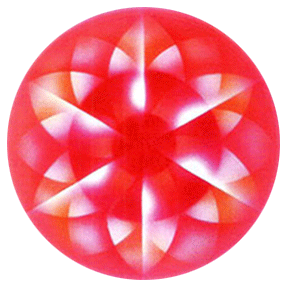 A strong, healthy sex chakra is needed for spiritual development. Sex energy can be transmuted into love and spiritual oneness. (Master Choa Kok Sui, The Spiritual Essence of Man)

The transmutation of sex energy is necessary for one's spiritual development. The sex energy, once transmuted, provides energy to the upper chakras. Therefore, sex energy is like "food" for the upper chakras. It is necessary for the proper functioning of the brain and nervous system. Whether one is celibate or not, the transmutation of sex energy will be extremely useful. (Master Choa Kok Sui,Universal & Kabbalistic Chakra Meditation on The Lord's Prayer)

Part of the sex energy is transmuted by the body to a higher form of pranic energy to be utilized for creative, intelligent and spiritual functions. (Master Choa Kok Sui, The Spiritual Essence of Man)

The key is to “transmute sex energy,” not to suppress it. When sex energy moves from the lower chakras up to the heart, the throat and the crown chakras, sex energy is transmuted into love, kindness, intelligence, illumination and divine oneness. (Master Choa Kok Sui, Experiencing Being)

The science and art of transmuting sex energy into creative energy, and into a higher form of pranic energy to activate the brain cells is taught in Arhatic Yoga. (Master Choa Kok Sui, The Spiritual Essence of Man)

There are several schools of thought. One extreme school of thought has the negative attitude that sex is dirty and must be avoided. With this kind of attitude, spiritual development is impossible. Why? The reason is that sex energy is suppressed and inhibited; therefore, it cannot go up to the upper chakras. Without the transmuted sex energy, the crown chakra, the center of illumination and divine oneness, cannot be activated and cannot function properly.

The other extreme school is the liberal sexual school where sex energy is just simply wasted. In this case, the sex chakra or Swadhishtana chakra is depleted to such an extent that there is hardly enough sex energy left to be transmuted for utilization by the upper chakras, especially the crown chakra.

The practical approach would be the middle path, which is to consider sex as natural and healthy, and to transmute sex energy. The transmutation of sex energy can be done solo, without a sex partner. This is practiced by the Northern Taoist School.

Sex is sacred. When it is done properly, it manifests as divine union of two souls, oneness with their higher souls and, eventually, oneness with all.

For a person to practice transmutation of energy with or without a sex partner, it is absolutely necessary that he must have a healthy and wholsome attitude towards sex. He must consider the sexual act as natural and sacred. Whether a person should be celibate or not is his or her own personal choice.

Lord Krishna was the avatar during the period of Taurus, for the Spring Equinox and Scorpio, for the Autumn Equinox. (Master Choa Kok Sui, The Existence of God is Self-Evident)

When Rajah Parikshit was questioning the character of Lord Krishna, the answer given was that even though He had many wives and gopis, He never lost a single drop of His semen when having sex. (Except for procreation purpose.)

Lord Krishna was the avatar during the period of Taurus and Scorpio. He symbolizes the mastery of sexual energy, transforming sexual energy into Spiritual Energy, to achieve oneness with God or achieving God realization.

Look at sex realistically and in a light mood. Sexual energy is needed to upgrade your brain cells. Sex, sweetness and intimacy are good, but you must also have a functional brain. (Master Choa Kok Sui, Experiencing Being)

Moderation in relation to sex means that one must have a healthy attitude towards sex. At the same time, it means that one must transmute some of the sex energy for psychological and spiritual development. (Master Choa Kok Sui, Compassionate Objectivity)

The throat chakra is the center for higher creativity. It is the higher correspondence of the sex chakra. The two are closely interconnected. This is why highly artistic or very intelligent people tend to have strong sexual drives and lots of sexual scandals. It is not possible for a person to be very creative or intelligent and be sexually impotent or inhibited at the same time. (Master Choa Kok Sui, The Spiritual Essence of man)

To have sexual urge or desire is very healthy. Sex is a joyful activity. One should not feel any guilt about it. It should not be repressed, but rather should be regulated. (Master Choa Kok Sui, Pranic Psychotherapy)

Sexual Desire experienced by priests or yogis may not be their desire at all! It may be the desire of those who are attracted to them. (Master Choa Kok Sui, Experiencing Being)

The sex chakra is the physical creative center for procreation. (Master Choa Kok Sui, The Spiritual Essence of Man)

The sex chakra controls and energizes the sex organs, the bladder and the urethra. It also affects the legs, the throat and the head. (Master Choa Kok sui, Advanced Pranic Healing)

It has been clairvoyantly observed that when a person is urinating, his sex chakra and meng mein chakra produce more orange prana, which is used in expelling and eliminating waste matter from the body.

The ajna chakra, throat chakra and basic chakra have a strong influence on the sex chakra. Malfunctioning of any of these chakras may adversely affect the sex chakra.

SOME CONDITIONS AS A RESULT OF A MALFUNCTIONING SEX CHAKRA

Malfunctioning of the sex chakra may manifest as:

A strong, healthy sex chakra is necessary for a healthy throat chakra, which is also responsible for the development of the mental faculty. Therefore, it is very important to treat the sex chakra of mentally retarded people for a prolonged period of time.

The transmuted sex energy is required for the proper functioning of the throat chakra and the chakras in the head area. Mentally retarded patients have depleted sex chakras. That is why their throat, ajna, forehead and crown chakras are also depleted and do not function properly. In older people, the sex chakra and the basic chakra are depleted. This is one of the factors why older people tend to become senile. (Master Choa Kok Sui, Advanced Pranic Healing)

Patients with myoma are usually sexually inhibited and have an improper attitude towards sex. The sex chakra is very congested and filled with dirty red energy. The sex energy is not sufficiently released even during sexual intercourse. The sexual desire is excessively suppressed; sex energy is not able to flow freely to the other chakras as in normal healthy persons. This has an accumulating effect manifesting as the development of myoma and its gradual growth. Women who have been sexually violated may develop a negative attitude towards sex which in the long run may manifest as sexual ailment(s). With nuns, this is a result of sexual abstinence without consciously or subconsciously sublimating the sex energy.

In Chinese medicine, it corresponds to the acupuncture point RN (CV) 2. (Master Choa Kok Sui, The Spiritual Essence of Man)

TAOIST AND INDIAN CORRESPONDENCE OF THE SEX CHAKRA

It was an excellent course full of a great number of teachings and knowledge from Amir (the instructor). Thank you for the valuable teachings.