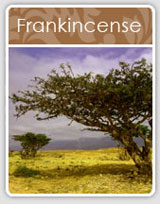 Once sought after by kings and valued as highly as gold, today, frankincense has regained popularity with aromatherapists, natural healers, and spiritualists all over the world as modern science has isolated certain active compounds in frankincense that have anti-arthritic properties.

Frankincense has been used for over 5,000 years, burning in temples throughout India, Egypt, and China. It is still used in the Catholic Churches as an incense for purification, spiritual growth, knowledge and meditation.

Frankincense has perhaps the greatest association with spiritualism than any other plant, herb, or oil on earth; it is even mentioned in the Bible as one of the gifts brought to the baby Jesus by the Three Wise Men.

In Judaism frankincense was used as one of the four main ingredients, the four sweet scents, in their ceremonial incense, forming an important part of their Sabbath offerings.
Frankincense is frequently mentioned in the Pentateuch and was presented along with shew-bread on the Sabbath.

The earliest recorded use of frankincense dates to an inscription in the 15th century BC tomb of an Egyptian Queen named Hathsepsut. The ancient Egyptians are known to have used frankincense as an incense and they ground the charred resin into Kohl, a powder used to make the distinctive black eyeliner seen on many figures in Egyptian art. The ancient Egyptians seemed to know of the health properties of frankincense, it was an ingredient in a popular rejuvenating facial mask.

In ancient Babylon, the great Temple of Baal is known to have used 2.5 tons of frankincense per year according to ancient documents and the writings of Herodotus. Around 2,000 years ago, there was a tremendous frankincense trade and many of today's middle-eastern cities sprang up along those old trade routes.

Frankincense grew so valuable as to rival gold and inspired Alexander the Great to plot to control the movement of frankincense just before his death. Herodotus also tells of the women of Scythia making frankincense into a perfume for the hands.

In China, frankincense was used for the treatment of leprosy and Pliny touts its qualities as an antidote to hemlock.

The Romans, according to Virgil in the Ecologues, used frankincense, what was then called mascula thura, not only in religious ceremonies but also on state occasions and in domestic life.

Reach Information. enjoyed the course very much, understood the concept clearly...credit to Ms. Shawanah our instructor.