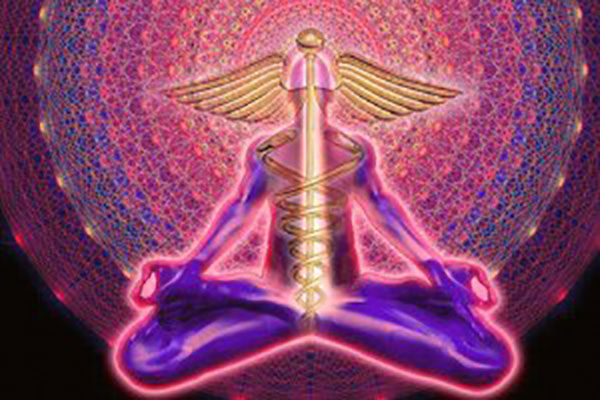 In the philosophy of Yoga, there is mention of two very powerful energies: Shiva and Shakti. While Shiva is regarded to be a masculine energy, Shakti is feminine. While Shakti is the energy in the physical world, the Shiva energy is related to the spiritual world. Shakti is therefore the manifest tangible counterpart of Shiva. Shiva is formless while Shakti is closely linked with matter.

Kundalini energy is a form of energy that works in unison with the Form, the Manifested, and the Physical Body. Spiritual schools regard Kundalini energy as a sacred fire that requires awakening and which eventually allows spiritual practitioners to register inner experiences as well as attain higher levels of consciousness.

The Upanishads describe Kundalini energy as a coiled serpent as the base of the spinal cord awaiting awakening. There are various references to this sacred energy in not only the Upanishads, but also various other religious texts and symbols. Even the fairy-tale of The Sleeping Beauty is considered by many to be a garbed reference to the Kundalini energy lying asleep just like the princess. The prince, being a symbol for the spiritually potent energy, awakens the Kundalini with a kiss.

The ability to experience bliss and the attainment of enlightenment through deep meditation are all results of awakening the Kundalini energy. Grand Master Choa Kok Sui, the founder of Pranic Healing and Arhatic Yoga regarded Kundalini energy as the energy that is needed to upgrade the brain cells as well as the physical body. Without an upgraded brain with the ability to register higher vibrations, being able to experience illumination is nearly impossible.

Therefore, this compatibility is the key to awakening the Kundalini energy effectively. Our inner experiences go unnoticed and we remain unaware of them till the brain has been developed enough.

The 49 Layers of Spiritual Awakening

The Kundalini energy is believed to have 7 layers with 7 sub-layers. Awakening this powerful energy results in Kundalini energy rising from the base of the spine, up the central meridian and eventually reaching the Crown Chakra or Sahasrara Chakra which is situated above the head. Fully awakened Kundalini energy involve the awakening of all the 49 layers. The question, with most spiritual practitioners, therefore is how many degrees of awakening the Kundalini have they successfully surpassed.

Using “improper” methods to awaken the Kundalini leads to many negative side effects often referred to as the Kundalini syndrome that includes symptoms like physical pains, rashes, incongruous heating up of the body, emotional imbalances, sexual syndromes and even hallucinations. It is thus advisable to follow a safe method of awakening the Kundalini.

It was very reassuring and so built my confidence even further