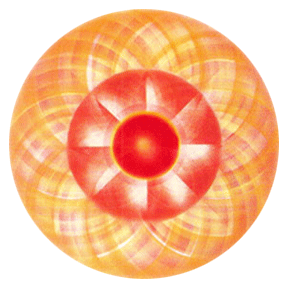 The meng mein chakra is located at the back of the navel. (Master Choa Kok Sui, Advanced Pranic Healing )

The meng mein chakra acts as some sort of a “pump” to facilitate the distribution of pranic energy from the basic chakra to the other parts of the body. (Master Choa Kok Sui, Advanced Pranic Healing)

To be more exact, the meng mein chakra acts as an "energy accelerator" that increases the rate of vibration of the lower pranic energy. This causes the lower pranic energy to gush out with tremendous speed through the back meridian and spread to all parts of the body and up to the crown. (Master Choa Kok Sui, The Spiritual Essence of Man)

By doing so, it activates the higher chakras and enables us to see things as they are. Every person is evolving, and evolution implies process, time and mistakes. (Master Choa Kok Sui, Universal and Kabbalistic Chakra Meditation on The Lord's Prayer)

Once a person realizes that everybody makes mistakes and that this is part of the natural process of spiritual evolution, forgiving others and also one's self becomes easy. Once there is forgiveness, inner healing and physical healing occur. Forgiving is therapeutic. (Master Choa Kok Sui, The Spiritual Essence of Man)

Its inner significance is that when there is conflict, the emphasis should be to defuse it rather than to escalate it and to restore h armony and peace.

The harmonizing and transformative approach is done by defusing the degree of conflict:

The size of the meng mein chakra is only about 1/3 to 1/2 the size of the other chakras, and should be treated only by experienced or Advanced Pranic Healers.

Malfunctioning of the meng mein chakra may manifest as kidney problems, low vitality, blood pressure ailments, and back problems, and may even manifest as abnormal growth rate of cells when the other major chakras are also malfunctioning.

The meng mein chakra of infants, children, pregnant women, and elderly people should not be energized unless really necessary - because of possible adverse effects.

Have you come across people who possess tremendous, almost supernatural, physical strength when they become violent? Patients who are violent have an overactivated meng mein chakra. The meng mein chakra controls and regulates the adrenal glands. The adrenal glands produce hormones that temporarily give a person extraordinary strength or power. The other chakras involved in this function are the solar plexus chakra and the basic chakra. (Master Choa Kok Sui, Pranic Psychotherapy)

In Chinese medicine, it corresponds to the acupuncture point DU (GV) 4. (Master Choa Kok Sui, The Spiritual Essence of Man)

TAOIST AND INDIAN CORRESPONDENCE OF THE MENG MEIN CHAKRA

The correspondence of the meng mein chakra in Tamil (Southern India), is Kachaivarmam.

In Kabbalah it is called Hod. The divine name of Hod is Adonai Tzabaoth.

Very fullfill experience.Teavcjing method was simple but clear and easy to understand..First time in so many years,I didn't touch my cellphone for long time..

I learnt how mind and body are connected. How to energise your mind and heal diseased conditions in body. I have found powerful and wonderful way to lead life.
It has given me some clarity towards my goal.
Thank you to Master and my teacher Ms.Rashmi to show me this path.