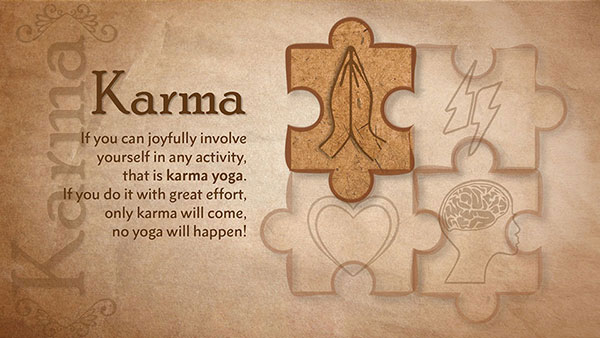 Karma yoga, or the "Yoga of action" is a form of yoga based on the teachings of the Bhagavad Gita, a sacred Sanskrit scripture of Hinduism. Of the three paths to realization, karma yoga is the process of achieving perfection in selfless action. Karma Yoga is primarily the practice of selfless service to humanity whereby a spiritual seeker attempts to give their actions selflessly without hoping for merit, fame or glory. This tendency for a human being to have attachment to 'reward' from action is termed in the Bhagavad Gita: the 'fruits of action' - meaning whatever one might gain from action, especially from the observation and applause of others.

Practicing Karma Yoga eventually takes the seeker to the point of mental purification, oneness with humanity and inner peace by continually offering action selflessly to God and humanity. Ultimately Karma Yoga practice brings true Knowledge of the Self and prepares one to be receptive to the divine light of God.

The Practicing of the selfless service in Karma Yoga is believed to lead with its purification of the mind and heart, to the turning of one's life into a spiritual act as a whole. In this practice, one is seen as being used as an instrument in the hands of God without expectation of reward in return but rather an act of worship.

Karma yoga is described as a way of acting, thinking and willing by which one orients oneself towards realization by acting in accordance with one's duty (dharma) without consideration of personal self-centered desires, likes or dislikes. One acts without being attached to the results of one's deeds.

Simply put, one does not get emotionally involved in the action being performed, becoming overly excited, upset or angry when the result of a deed is not as expected. The result may be negative or positive. Geeta also talks about "Meta"-Karma Yoga. I.e. not getting irritated, annoyed or unhappy when one gets attached to the result even after trying to practice Karma Yoga.

Krishna explains that work done without selfish expectations purifies one's mind and gradually makes an individual fit to see the value of reason. He states that it is not necessary to remain in external solitude, or remain actionless, in order to practice a spirituality or have spiritual life, since the state of action or inaction is primarily determined in the mind.

Words & Teachings of GMCKS this is a collection of Master Choa Kok Suo Teachings in different courses.

This course was perfectly organized in a way that helps a student grasp the basic concepts of pranic healing and opens new dimensions of thinking. I loved it:)

I loved it, and Sriram delivered it clearly