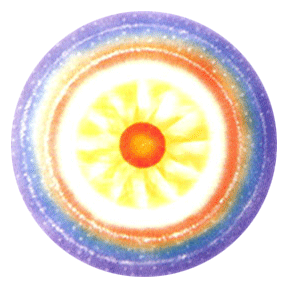 The crown chakra is located at the top of the head. (Master Choa Kok Sui, Advanced Pranic Healing )

The crown chakra is also the center of illumination or self-realization.This is the meaning of yoga : it is union. Union with what? Union with one’s higher soul; eventually, and inevitably, it is oneness with all. It is through the crown chakra that one experiences the Buddha Nature within and oneness with the higher soul. (Master Choa Kok Sui, The Spiritual Essence of Man )

Compassion is a path to oneness. It activates the crown chakra which facilitates the achievement of divine oneness. (Master Choa Kok Sui, Compassionate Objectivity )

The crown chakra is the center of higher intuition or the higher buddhic faculty. This faculty, when fully developed, manifests as “direct knowing” or “direct inner perception.” It is knowing without having to study. What is learned through the buddhic faculty in a few minutes will require weeks, if not months, to put into words. A person with only a developed mental faculty will have to unravel or plow through a problem; whereas, a person with even only a partially developed buddhic faculty has a quick overall grasp of the problem and its possible solutions. (Master Choa Kok Sui, Pranic Psychotherapy )

Unfortunately, our present educational system does not encourage the development of the intuition, on the grounds that the solution or conclusion is not rationally arrived at. Direct perception or intuition is not logical or rational. The truth is that the intuitive faculty is beyond logic; it transcends logic and the rational mind. In Buddhism, direct inner perception or intuition is called Buddhichitta.

The crown chakra is the intuitive center. What is intuition? What is the difference between intuitive intelligence and mental intelligence? The difference is similar to a man who can see and a man who is blind. If a blind man wants to know an elephant, he has to touch it for quite some time, gather data and process them to have an idea of the shape of the elephant. A person who has eyes to see will simply open his eyes and will know exactly what an elephant looks like and will say, “That is an elephant.” Intuitive intelligence is just like opening your eyes and saying, “I know what that is.” Mental intelligence requires the study and the use of logic through inductive and deductive reasoning.

Many scientific discoveries are made through intuitive intelligence. Ideas simply flash in the minds of some scientists. Many good businessmen have intuitive intelligence. They “look” at certain transactions and they go straight to the point in executing plans. The prolonged practice of the Meditation on Twin Hearts helps a person in his ability “to see” and “to penetrate” very quickly. People with intuitive intelligence will become very superior. (Master Choa Kok Sui, Achieving Oneness with the Higher Soul )

The crown chakra controls and energizes the pineal gland, the brain, and the entire body. (Master Choa Kok Sui, Miracles Through Pranic Healing ) Modern scientific research shows that the pineal gland is connected with aging and anti-aging processes.

SOME CONDITIONS AS A RESULT OF A MALFUNCTIONING CROWN CHAKRA

In Chinese medicine, it corresponds to the acupuncture point DU (GV) 20. (Master Choa Kok Sui, The Spiritual Essence of Man)

TAOIST AND INDIAN CORRESPONDENCE OF THE CROWN CHAKRA

In Taoist yoga, it is known as bai hui, which literally means “meeting point for the hundreds.” Bai hui is the entry point of Tian [God] chi. The downpouring of the spiritual energy or Tian chi is called in Christian terminology the “descent of the holy spirit.” Therefore, the crown chakra is a very important spiritual center.

A certain degree of physical and psychological preparations is needed to activate the crown chakra.

To tread the spiritual path without inner and outer purifications will adversely affect the physical body and will eventually result also in psychological imbalance. This is the meaning of the verse in Matthew 9:17. “Do not put new wine in an old wine bag.”

The Sanskrit term for crown chakra is sahasrara chakra. In Tamil (Southern India), it is called Pootellu varmam.

In Kabbalah it is called Kether. The divine name of Kether is Ehieh.

The course brought me a different vision and did very well improved my personal growth and vision. I do recommend the course strongly as it has definitely change very much my perception of the world.