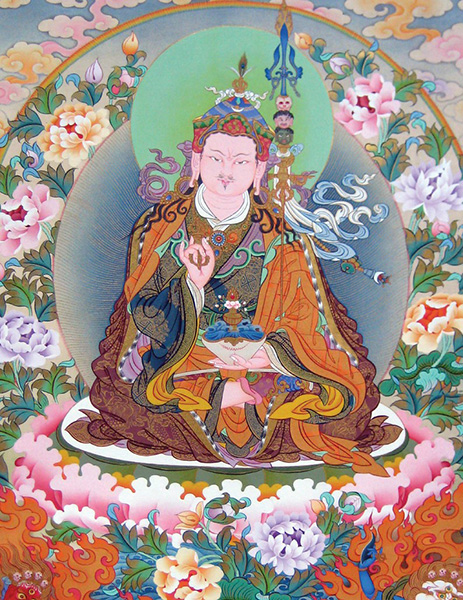 In Buddhism, bodhisattva is the Sanskrit term for anyone who, motivated by great compassion, has generated bodhicitta, which is a spontaneous wish and a compassionate mind to attain buddhahood for the benefit of all sentient beings.

In early Indian Buddhism, the term bodhisattva was primarily used to refer specifically to Gautama Buddha in his former life.

The term bodhisatta is used in the Pāli Canon to refer to Gautama Buddha in his previous lives and as a young man in his current life in the period during which he was working towards his own liberation. When, during his discourses, he recounts his experiences as a young aspirant, he regularly uses the phrase "When I was an unenlightened bodhisatta..." The term therefore connotes a being who is "bound for enlightenment", in other words, a person whose aim is to become fully enlightened. In the Pāli canon, the bodhisatta is also described as someone who is still subject to birth, illness, death, sorrow, defilement, and delusion. Some of the previous lives of the Buddha as a bodhisattva are featured in the Jataka tales.

According to the Theravāda monk Bhikkhu Bodhi, the bodhisattva path is not taught in the earliest strata of Buddhist texts such as the Pali Nikayas (and their counterparts such as the Chinese Āgamas) which instead focus on the ideal of the Arahant. In later Theravada literature, the term "bodhisatta" is used fairly frequently in the sense of someone on the path to liberation.

Mahāyāna Buddhism is based principally upon the path of a bodhisattva. According to Jan Nattier, the term Mahāyāna ("Great Vehicle") was originally even an honorary synonym for Bodhisattvayāna, or the "Bodhisattva Vehicle".

The earliest depiction of the Bodhisattva path in texts such as the Ugraparipṛcchā Sūtra describe it as an arduous, difficult monastic path suited only for the few which is nevertheless the most glorious path one can take.

A Bodhisattva, which we could think of in terms of being a direct “Spiritual Son,” emanated from the Dhyani Buddha (Celestial Lord creates through the power of Dhyana (mystic meditation)) .

This Bodhisattva has the mission to incarnate directly in a physical body on Earth and to then remain behind on Earth, after the death of the human body, to continue the work of the Buddha until the Buddha of the succeeding Root Race appears, many thousands of years later.

The remaining Bodhisattva, lingering invisibly as a type of Nirmanakaya (one who has reached to Nirvana but renounced it in order to remain behind to help humanity), may himself occasionally incarnate in (but not as) other individuals when necessary and when decreed by the Law of Karma.

An avatar (Sanskrit) is a concept in Hinduism and it means "descent", and refers to the appearance or incarnation of a deity on earth. The term also generally refers to "alight, to make one's appearance" and is sometimes used to refer to any revered guru or human being.

Avatar literally means "descent, alight, to make one's appearance", and refers to the embodiment of the essence of a superhuman being or a deity in another form. The word also implies "to overcome, to remove, to bring down, to cross something". In Hindu traditions, the "crossing or coming down" is symbolism, of the divine descent from "eternity into the temporal realm, from unconditioned to the conditioned, from infinitude to finitude".

An avatar is a saguna (with form, attributes) embodiment of the nirguna Brahman(one of the aspects of god in Hinduism who connotes the highest Universal Principle, the Ultimate Reality in the universe). In Buddhism the equivalent of Avatar is Bodhisattva. 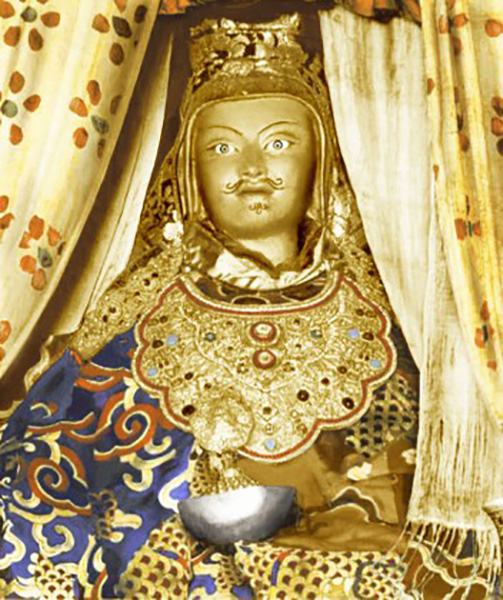 "I am present in front of anyone who has faith in me, just as the moon casts its reflection, effortlessly, in any vessel filled with water."

Bodhisattva Mei Ling has been a Great Teacher for aeons and aeons of time. Under his direct and indirect tutelage are also Taoist immortals and yogis, the siddhas and mahasiddhas in India, and other great spiritual teachers from other traditions.

Boddhisattva Mei Ling came from Kashmir, on the side of what is known as Pakistan, "close to the border with Afghanistan and Tajikistan. More precisely, his homeland is often cited as Swat Valley, an area called Udyan." In 747 A.D., he went to Tibet upon the invitation of King This-srong-detsan and started teaching Tantric Buddhism. According to the accounts of Christopher Beckwith, a western historian:

One may also conclude that a major reason for so many Indian Buddhist sages coming to Central Tibet from Kashmir, and notably, the famous Bodhisattva from Udyana, was the simple fact that Tibet then ruled much of this region.

One of the Previous Incarnations of Bodhisattva Mei Ling is Known as Avatar Rama. He is also Known as Mahaguruji Meil Ling to the Pranic Healing and Arhatic Yoga Practitioners .

The spiritual practitioner is called a Bodhisattva when he/she is at the Seventh Initiation level of the spiritual path.

It's very useful course to recognize my soul, and to develop me personally and Spiritually

This course had a life changing impact on my life. I used to stress a lot, but now I use the meditations, healing and blue triangle and I am a new person. Thank you so much! May God bless you all!