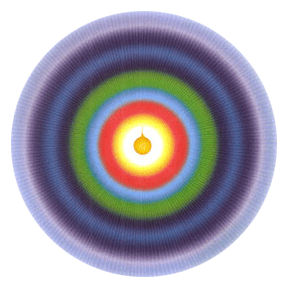 There are supposedly only 11 chakras. But the book of Revelation mentions the Tree of Life having 12 fruits: “… The tree of life, which bears twelve manner of fruits…” (Revelation 22:2). Did Saint John the Beloved make a mistake in counting? This is very strange because in traditional Kabbalistic teachings there are only 10 sephiroth, plus one hidden sephirah. However, in Pranic Healing and Arhatic Yoga there are 11 major chakras within the body, plus the 12th chakra located outside the body, 12 inches above the head. Therefore, in Pranic Healing and Arhatic Yoga there are also 12 chakras. This is the meaning of the Tree of Life bearing 12 fruits. (Master Choa Kok Sui, Achieving Oneness with the Higher Soul)

It is also mentioned in the Holy Bible, in the book of Revelation, which mentions a great city with 12 gates guarded by 12 angels – “… and had twelve gates, and at the gates twelve angels, …” (Revelation 21:12). It also mentions the Tree of Life having 12 fruits: “… The tree of life, which bears twelve manner of fruits…” (Revelation 22:2). These correspond to the 12 chakras.  (Master Choa Kok Sui, Superbrain Yoga)

Why is the incarnated soul called The Infinite Light? To understand this, it is necessary to have a certain degree of inner experience or spiritual insight. You have to remember who you are. An intellectual comprehension that you are not the body is the first stage in spiritual development. The second stage is experiencing the body “disappearing.” In the third stage, the yogi experiences himself as a being of divine flame radiating simultaneously in all directions throughout the inner cosmos. This is why the incarnated soul is called The Infinite Light. (Master Choa Kok Sui, The Spiritual Essence of Man )

In the Christian tradition, the 12th chakra and the incarnated soul are referred to as the Pentecostal Fire. It is also called by Saint Paul as the “Holy Spirit.”

In the Egyptian tradition the incarnated soul is called Ba. In the Hindu tradition, it is called Jivatma. Jiv means “embodied” while atma means “self” or “soul.”

In Tibetan Buddhism, the incarnated soul is called the “Buddha nature.” (Master Choa Kok Sui, The Spiritual Essence of Man )

Pranic Psychic Self Defense course was very interesting. I am suggesting the course who are interested in metaphysical subjects.