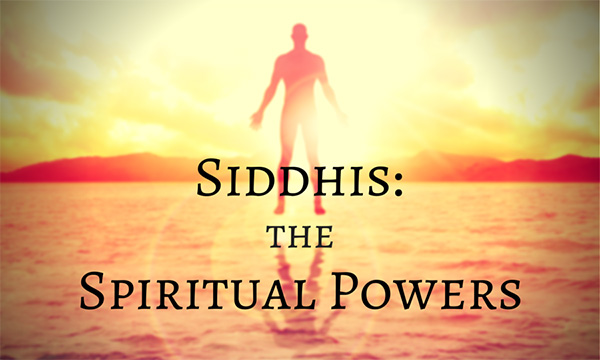 "The whole history of science shows us that whenever the educated and scientific men of any age have denied the facts of other investigators on a priori grounds of absurdity or impossibility, the deniers have always been wrong."

Classic yoga texts, such as Patanjali’s Yoga Sutras, written about two thousand years ago, tell us in matter- of-fact terms that if you sit quietly, pay close attention to your mind, and practice this diligently, then you will gain psychic or occult powers. These advanced capacities, known as siddhis, are not regarded as magical; they’re ordinary capacities that everyone possesses. We’re just too distracted most of the time to be able to access them reliably.

The sage Patanjali also tells us that these siddhis can be attained by ingesting certain drugs, through contemplation of sacred symbols, repetition of mantras, ascetic practices, or through a fortuitous birth.

In the yogic tradition, powers gained through use of mantras, amulets, or drugs are not regarded with as much respect, or considered to be as permanent, as those earned through dedicated meditative practice. The promise of these siddhi superpowers has little to do with traditional religious faith, divine intervention, or supernatural miracles.

Yogic wisdom describes many variations of the siddhis. Today we’d associate the elementary siddhis with garden-variety psychic phenomena. They include telepathy (mind- to- mind communication); clairvoyance (gaining information about distant or hidden objects beyond the reach of the ordinary senses); precognition (clairvoyance through time), and psychokinesis (direct influence of matter by mind, also known as PK).

For most people, psychic abilities manifest spontaneously and are rarely under conscious control. The experiences tend to be sporadic and fragmentary, and the most dramatic cases occur mainly during periods of extreme motivation. By contrast, the siddhis are said to be highly reliable and under complete conscious control; as such they could be interpreted as exceedingly refined, well-cultivated forms of psychic phenomena.

The more advanced siddhis are said to include invisibility, levitation, invulnerability, and super strength, abilities often associated with comic book superheroes. All these abilities are also described in one form or another in shamanism and in the mystical teachings of religions. In fact, most cultures throughout history have taken for granted that superpowers are real, albeit rare, and surveys today continue to show that the majority of the world’s population still firmly believes in one or more of these capacities.

The class was rich