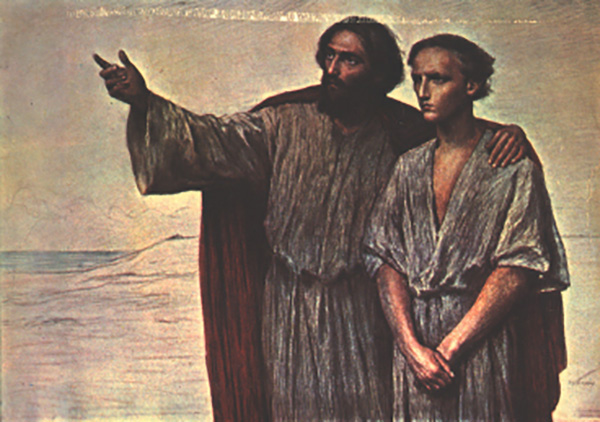 "At the second initiation, one gains full control of the astral body."

The second initiation is said to be one of the most difficult and painful. Fundamentally, it represents the triumph of the soul over the emotional nature of the personality. When this initiation is taken, the individual has demonstrated that the Self is no longer victimized by the tides of emotion and feeling states. Mastery over emotion or Mastery of the Astral Body is not here to be interpreted as repression. Rather, it represents one’s ability to rise above emotion, while still honoring it. This is accomplished through the use of the illumined mind. It is the mind, in its capacity to observe emotion, which makes it possible for this initiation to take place. When the mind is operating this way, the individual can free him/herself from the “slavery of ideas” and from fanatical reactions to truth. As such, a balanced perspective, and the expression of emotional temperance, are both prerequisites for taking this initiation. It is therefore not surprising that these disciples provide truly uplifting and powerful service in the betterment of humanity. Though speculation only, an example of a disciple of this status was Marie Curie, the discoverer of radium. In the Esoteric Teaching we are given to understand that it takes between five and seven incarnations to travel from the first initiation to the second. Not surprising, the bulk of today’s spiritual community are 1st degree initiates who are slowly working their way toward the second initiation.

The Disciple on the path of mastery over emotional body

The key teaching in the second initiation is mastery over the astral body. This is often the most difficult initiation to pass and can sometimes take many incarnations. However, it' can be easily achieved by those who are willing to become masters and are serious about spiritual path. Those people will pass the 2nd initiation much more quickly than those who are not so devoted to the path. The 2nd initiation is related to sacrifice and death of negative desire. The lower nature is being controlled. Astral body becomes pure and serene (energies from the astral slowly stop impacting on the initiate). Sometimes the second Initiate is known as the Disciple.

The three great fetters the candidate to the Second Initiation

When those three fetters are utterly cast aside, when they no longer have power to hold him back, then he has grown to young manhood, when he is ready to pass the second of the great Initiations. In the Christian drama it is called the Baptism. It is written that the Spirit of God came down upon Jesus, and abode with Him. That is the Christian form; the Spirit comes down, the Spirit of Intuition, and before he can go further, to the third Initiation, he must learn to bring it down, through his enlarged causal and mental bodies, to his physical consciousness, so that it may “abide on him”, and guide him.

A very great expansion and development of the mental body takes place in connection with this second Initiation, but it is usually some years before the effects of this can show themselves in the physical brain. As they begin to do so they unquestionably put a great strain upon that brain, as it cannot be instantaneously tuned to the necessary pitch.

At this stage no additional fetters are cast off, but it is usually a period of considerable psychic and intellectual advancement. If what are commonly called psychic faculties have not been previously acquired, it is the tradition that they should be developed at this stage.

The period after the taking of the second Initiation is in many ways the most dangerous on the Path. . . . In nearly all cases the danger comes through pride; if there is the least tinge of pride in the man's nature, he is in serious risk of a fall . . . and if he once starts on that line he will have a terribly hard time getting back again. Nothing but unceasing and increasing vigilance can enable him to pass through this stage successfully, and it must be his constant endeavor to kill out every trace of pride, selfishness and prejudice.

It is said that he who has reached this initiation should need only one more incarnation before attaining the third Initiation and fourth Initiation.

The content of the course exceeded my expectations!
It is an amazing course revealing very powerful sacred tools!