Home > Our System > Master Kuthumi the master of second ray 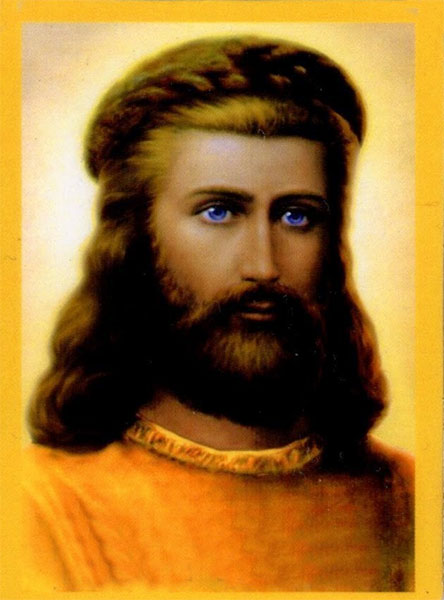 The Master Kuthumi wears the body of a Kashmiri Brahman, and is as fair in complexion as the average Englishman. He, too, has flowing hair, and His eyes are blue and full of joy and love. His hair and beard are brown, which, as the sunlight catches it, becomes ruddy with glints of gold. His face is somewhat hard to describe, for His expression is ever changing as He smiles; the nose is finely chiselled, and the eyes are large and of a wonderful liquid blue.

Master Kuthumi, serves with Jesus as World Teacher; formerly Chohan of the Second Ray of Divine Illumination. Kuthumi is known as the Master Psychologist and a sponsor of youth. He is hierarch of the etheric Temple of Illumination in Kashmir, India, also called the Cathedral of Nature, and head of the Brothers and Sisters of the Golden Robe.

Kuthumi maintains his retreat in the heaven-world over Shigatse, Tibet, where he plays his grand organ—drawing the harmony of cosmos by the sacred fires of his heart. With this celestial music, he sends healing and peace throughout the planetary body to souls in transition (especially at the hour of death) and guides them to the etheric retreats of the Great White Brotherhood for tutoring in preparation for their next earthly life. He inspires architects, poets, and scientists with the mystical remembrance of their own soul’s harmony in the celestial geometry and the rhythm of the stars.

Thutmose III, reigned c. 1503-1450 b.c., pharaoh, prophet, and high priest in the period of the New Kingdom. Thutmose expanded the Egyptian kingdom to include most of the Middle East. His most deci¬sive victory was on a battlefield near Mt. Carmel. There he led the entire army single file through narrow Megiddo Pass to surprise and defeat an alliance of 330 rebellious Asian princes—a daring maneuver protested by the pharaoh’s terrified offi¬cers. Thutmose alone was assured of his plan and rode ahead holding aloft the image of Amon-Ra, the Sun God who had promised him the victory.

Pythagoras, c. 582-c. 507 b.c., Greek philosopher, the “fair-haired Samian” who was regarded as the son of Apollo. As a youth, Pythagoras conferred freely with priests and scholars, eagerly seeking scientific proof of the inner law revealed to him in meditation upon Demeter, the Mother of the Earth. His quest for the great synthesis of truth led him to Palestine, Arabia, India, and finally to the temples of Egypt, where he won the confidence of the priests of Memphis and was gradually accepted into the mysteries of Isis at Thebes.

When Asian conqueror Cambyses launched a savage invasion of Egypt c. 529 b.c., Pythagoras was exiled to Babylon, where the prophet Daniel still served as king’s minister. Here rabbis revealed to him the inner teachings of the I AM THAT I AM given to Moses. Zoroastrian magi tutored him in music, astronomy, and the sacred science of invocation. After twelve years, Pythagoras left Babylon and founded a brotherhood of initiates at Crotona, a busy Dorian seaport in southern Italy. His “city of the elect” was a mystery school of the Great White Brother¬hood.

At Crotona, carefully selected men and women pursued a philosophy based upon the mathematical expression of universal law, illustrated in music and in the rhythm and harmony of a highly disciplined way of life. After a five-year probation of strict silence, Pythagorean “mathematicians” progressed through a series of initiations, developing the intuitive faculties of the heart whereby the son or daughter of God may become, as Pythagoras’ Golden Verses state, “a deathless God divine, mortal no more.”

Pythagoras delivered his lectures from behind a screen in a veiled language that could be fully comprehended only by the most advanced initiates. The most significant phase of his instruction concerned the fundamental concept that number is both the form and the essence of creation. He formulated the essential parts of Euclid’s geometry and advanced astronomical ideas that led to Copernicus’ hypotheses. It is recorded that two thousand citizens of Crotona gave up their customary lifestyle and assembled together in the Pythagorean community under the wise administration of the Council of Three Hundred—a governmental, scientific, and religious order that later exercised great political influence throughout Magna Grecia.

Pythagoras, the “indefatigable adept,” was ninety when Cylon, a rejected candidate of the mystery school, incited a violent persecution. Standing in the courtyard of Crotona, Cylon read aloud from a secret book of Pythagoras, Hieros Logos (Holy Word), distorting and ridiculing the teaching. When Pythagoras and forty of the leading members of the Order were assembled, Cylon set fire to the building and all but two of the council members were killed. As a result, the community was destroyed and much of the original teaching was lost. Nevertheless, “the Master” has influenced many great philosophers, including Plato, Aristotle, Augustine, Thomas Aquinas, and Francis Bacon.

Balthazar, first century, one of the three Magi (astronomer/adepts) who followed the star (the I AM Presence) of the Manchild born to the Virgin Mary. Believed to have been the King of Ethiopia, Balthazar brought the treasure of his realm, the gift of frankincense, to Christ.

Saint Francis of Assisi, c. 1181-1226, the divine poverello, who renounced family and wealth and embraced “Lady Poverty.” He lived among the poor and the lepers, finding unspeakable joy in imitating the compassion of Christ. While kneeling at Mass on the feast of St. Matthias in 1209, he heard the gospel of Jesus read by the priest and the Lord’s command to his apostles, “Go, preach.” Francis left the little church and began evangelizing and converting many. Among them was the noble Lady Clare, who later left her home dressed as the bride of Christ and presented herself to Francis for admittance to the mendicant order.

One of the many legends surrounding the lives of Francis and Clare describes their meal at Santa Maria degli Angeli, where Francis spoke so lovingly of God that all were enraptured in Him. Suddenly the people of the village saw the convent and the woods ablaze. Running hastily to quench the flames, they beheld the little company enfolded in brilliant light with arms uplifted to heaven.

God revealed to St. Francis the divine presence in “brother sun” and “sister moon” and rewarded his devotion with the stigmata of Christ crucified. The prayer of St. Francis is yet spoken by people of all faiths throughout the world: “Lord, make me an instrument of thy peace!...”

Shah Jahan, 1592-1666, Mogul emperor of India, who overthrew the corrupt government of his father, Jahangir, and restored in part the noble ethics of his grandfather Akbar the Great. During his enlightened reign, the splendor of the Mogul court reached its zenith and India entered her golden age of art and architecture. Shah Jahan lavished the imperial treasury on music, paintings, and the construction of awesome monuments, mosques, public buildings, and thrones throughout India, some of which may still be seen today.

The famous Taj Mahal, “the miracle of miracles, the final wonder of the world,” was built as a tomb for his beloved wife, Mumtaz Mahal. She had ruled by his side almost as an equal and died in 1631 giving birth to their fourteenth child. Shah Jahan spared no effort in making the monument “as beautiful as she was beautiful.” It is the symbol of the Mother principle and celebrates his eternal love for Mumtaz.

The color percentage is a bit unclear on how to project. Probably a sample of all color on the percentage to be projected will help proper color with the

It was rich in new informations and the speaker dr. Noha was generous in explanation and clarification. I am so grateful at all