Home > Our System > Master Hilarion the master of fifth ray 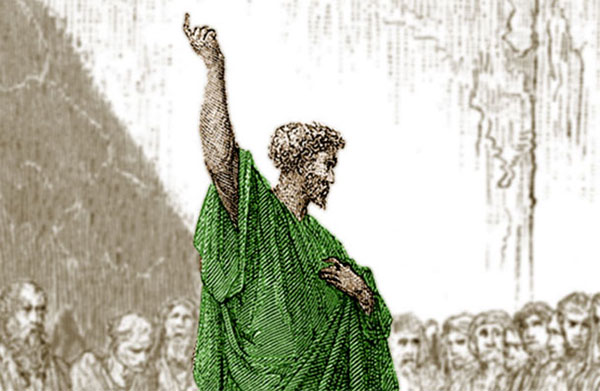 Hilarion is the chohan of the fifth ray of healing and truth. He is the hierarch of the Temple of Truth on the etheric plane near Crete, Greece.

Theosophist C.W. Leadbeater wrote that the Master Hilarion's primary influence is upon the scientists of the world.

In the teachings of Alice A. Bailey, the fifth ray of the seven rays, called by Alice A. Bailey the orange ray, which he is said to oversee, is called the ray of concrete science.

In the Ascended Master Teachings, as Hierarch of the Brotherhood of Truth in the etheric plane over Crete, Hilarion is said to assist the scientists and spiritual leaders of the world with the flame of truth and channels the spiritual energy of what is called in the Ascended Master Teachings the green ray or emerald ray, the 5th of the Seven Rays.

Hilarion was high priest of the Temple of Truth on Atlantis, and he transported the flame of Truth together with the artifacts of the Temple to Greece a short time before the sinking of the continent.

The focus of Truth that he established became the focal point for the Oracles of Delphi, messengers of Truth who served under the direction of Pallas Athena for hundreds of years, until black priests penetrated the Delphic Order and perverted the Truth that had been brought forth. The Brotherhood then withdrew this service to embodied mankind, since people were unable to distinguish between Truth and error.

Hilarion sponsors teachers of Truth, servants of God, religious leaders and missionaries, as well as those practicing the healing arts, scientists and engineers in all fields, mathematicians, musicians, those specializing in computer and space technology and those who work with all forms of media and communications.

Together with fifth-ray masters and the Brotherhood of Crete, Hilarion works steadfastly to draw their consciousness into a greater and greater appreciation of the full spectrum of Truth, which most have experienced only in part. To take them from a partial knowledge of truth to self-awareness in the divine wholeness of Truth is the goal of these brothers.

Hilarion instructs us on the relationship between science and religion, both of which are aspects of the green ray of Truth.

We can call to Hilarion and the Brotherhood of Crete for healing and wholeness, for the conversion of souls and for the exposure of truth in the media.

The Master Hilarion is believed to have been incarnated as the Apostle Paul of Tarsus and the Neo-Platonic philosopher Iamblichus. Some have believed that he was the Christian saint Hilarion. This is possible, since although the years Iamblichus, also known as Iamblichus Chalcidensis, (c. 245 - c. 325) was embodied overlap the lifetime of St. Hilarion (291 - 371), various traditions such as Hindu and Tibetan Buddhism hold that it is possible for the spiritually advanced to have more than one incarnation happening at the same time.

In October 1884 Helena Blavatsky made reference to Hilarion (using the spelling: "Hillarion"):

"...an "Eastern adept, who has since gone for his final initiation," who had passed, en route from Egypt to Thibet, through Bombay and visited us in his physical body. Why should this "Adept" be the Mahatma in question? Are there then no other Adepts than Mahatma Koot Hoomi? Every Theosophist at headquarters knows that I meant a Greek gentleman, whom I have known since 1860."

On 20 February 1881 Kuthumi, in one of his letters to Sinnett, referred to him as "one of ours having passed through Bombay on his way from Cyprus to Tibet". His travel to his "final initiation" is referred to in an entry in Henry Olcott's diary, dated 19 February 1881, written in Bombay:

"Hillarion is here en route for Tibet and has been looking over, in, and through the situation. Finds something morally awful. Views on India, Bombay, the TS in Bombay, Ceylon , England and Europe, Christianity and other subjects highly interesting." (Letters from the Masters of Wisdom, 2nd Series, page 93)

Embodied as Saul of Tarsus during the rise of Jesus' popularity, Saul became a determined persecutor of Christians, originally seeing them as a rebellious faction and a danger to the government and society. Saul consented to the stoning of Stephen, a disciple of Jesus, failing to recognize the light in this saint and in the Christian movement.

Jesus had already resurrected and ascended2 when he met Saul on the road to Damascus. And what an electrifying meeting that was! "It is hard for thee to kick against the pricks," Jesus uttered to an awestruck Saul. Blinded by the light that surrounded the form of Jesus, Saul crumpled to the ground. Not only his body but his pride was taken down a few notches that day.

This was the most famous of Christian conversions, whereupon Saul became the mightiest of the apostles. Saul took the name Paul and resolved to spread the word of truth throughout the Mediterranean and the Middle East. Paul had inwardly remembered his vow to serve the light of Christ a vow that he had taken before his current incarnation. Three years after conversion, Paul spent another three years in seclusion in the Arabian Desert where he was taken up into Jesus' etheric retreat. Paul did not ascend in that life due to his torturing of Christians earlier in that embodiment.

In his very next lifetime, Paul was born to pagan parents in 290 A.D. They resided in the same geographical region in which he had lived as Paul in his previous lifetime. As a young boy, Hilarion was sent to Alexandria to study. During this time of study, he heard the gospel and was converted to Christianity.

His greatest desire was to be a hermit to spend his time fasting and praying to God in seclusion. So he divided his fortune among the poor and set out for the desert near Gaza. He spent twenty years in prayer in the desert before he performed his first miracle. God, through him, cured a woman of barrenness. And his healing ministry began.

Soon Hilarion was sought out by hundreds who had heard of his miraculous cures and ability to exorcise demons. In 329 A.D., with a growing number of disciples assembling around him, he fled to Egypt to escape the constant flow of people seeking to be healed from all manner of diseases. His travels brought him to Alexandria again, to the Libyan Desert and to Sicily.

But his miracles did not only include healings. Once when a seacoast town in which he was staying was threatened with a violent storm, he etched three signs of the cross into the sand at his feet then stood with hands raised toward the oncoming waves and held the sea at bay.

Hilarion spent his last years in a lonely cave on Cyprus. He was canonized by the Catholic Church and is today known as the founder of the anchorite life, having originated in Palestine. To this day, those known as anchorites devote themselves to lives of seclusion and prayer. Hilarion ascended at the close of that embodiment.

My whole life has led me to this. Pranic healing has re instilled my beliefs in the ourselves and our connection to everything