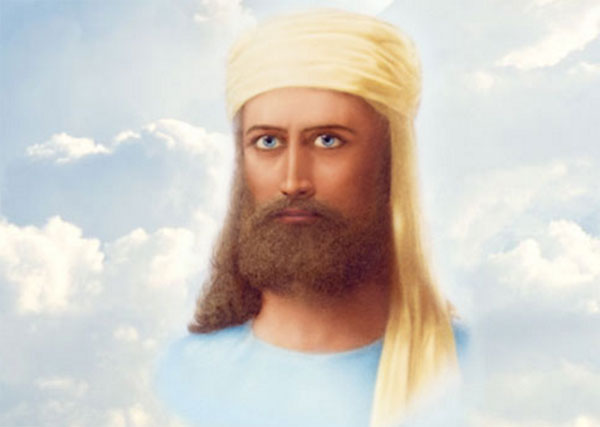 El Morya is the Chohan of the first ray and chief of the Darjeeling Council of the Great White Brotherhood. El Morya represents the godly attributes of courage, certainty, power, forthrightness, self-reliance, dependability, faith and initiative. These are the qualities of the Father principle-the statesman, the executive, the ruler.

Because he has ably outpictured these essential virtues, El Morya has, through many embodiments, worn the crown of authority, ruling many kingdoms wisely and well. His rulership has not been that of a dictator, demanding that his subjects submit to his human will; but rather, his interpretation of government is God-over-men and his concept of true statesmen is God's overmen. He inspires in his subjects illumined obedience to the holy will of God.

Morya's earliest notable claimed incarnation is recorded by Annie Besant and C.W. Leadbeater (from, the source states, their research into the "akashic records" at the Theosophical Society headquarters in Adyar (Tamil Nadu), India conducted in the summer of 1910) as having been the Emperor of Atlantis in 220,000 BC, ruling from his palace in the capital city, the City of the Golden Gates.

According to the Ascended Masters teachings, some of the later incarnations that Morya is said to have had include:

Abraham. His story is told in the first book of the Old Testament. Both Jewish and Christian children alike have heard the tale of God's call to his obedient son. "Get thee out of thy country and from thy father's house unto a land I will show thee."3 God promised Abraham that his obedience would lead to blessing. He would be the progenitor of a great nation. Abraham left the house of his father. And God did bless him. Called the Father of Nations, Abraham, even in his advanced age, was sired a son, Isaac. From this lineage the Twelve Tribes of Israel emerged. El Morya was Abraham.

In the fifth century, a ruler of mythical proportion enters life's stage. Arthur was the creator of the Table Round, a culture of brotherhood whose rallying cry was, "All for one and one for all!" His holy knights were reputed for their bravery in battle and service to their monarch and his kingdom. No myth, this noble soul forged a glorious society where respect, justice, courage and truth prevailed the mystical Camelot. El Morya was King Arthur.

Twelfth century England finds the soul of El Morya incarnated asThomas Becket, Archbishop of Canterbury, defender of the church and at odds with King Henry II. Conflict regarding the influence of the church in the political affairs of the realm rise to a fever pitch. And Becket pays for his stand with his very life, brutally slain within the environs of his own cathedral by four knights performing the king's bidding.

Three centuries later, El Morya returns as Thomas More, Chancellor of England, during the reign of Henry VIII. And once again the soul of El Morya finds himself at loggerheads with the king of England. The same conflict of church and state arises, clothed in different circumstances. Separation from his family, years of imprisonment and finally a sentence of death by decapitation bring to a dramatic end in 1535 yet another embodiment of this unflinching soul. Thomas More's final words to all who witnessed his execution were, "I am the king's good servant, but God's first."

A mere seven years later, El Morya returns this time to embody in the East. He is Akbar, the greatest of the Mogul emperors. A ruler with refined qualities and varied talents, Akbar increased his kingdom through decisive action in battle but also diplomacy. He raised its culture through art, literature and architecture. Interested in all religions and religious practices but not the conflict they aroused, he desired to unify believers into one religion which he called the "Divine Faith."

Shams Tabrizi or Shams al-Din Mohammad (1185-1248) was a Persian Muslim, who is credited as the spiritual instructor of Mewlana Jalal ad-Din Muhammad Balkhi, also known as Rumi and is referenced with great reverence in Rumi's poetic collection, in particular Diwan-i Shams-i Tabrizi (The Works of Shams of Tabriz). Tradition holds that Shams taught Rumi in seclusion in Konya for a period of forty days, before fleeing for Damascus. The tomb of Shams-i Tabrizi was recently nominated to be a UNESCO World Heritage Site.

According to Sipah Salar, a devotee and intimate friend of Rumi who spent forty days with him, Shams was the son of the Imam Ala al-Din. In a work entitled Manaqib al-arifin (Eulogies of the Gnostics), Aflaki names a certain Ali as the father of Shams-i Tabrizi and his grandfather as Malikdad. Apparently basing his calculations on Haji Bektash Veli's Maqalat (Conversations), Aflaki suggests that Shams arrived in Konya at the age of sixty years. However, various scholars have questioned Aflaki's reliability.

Shams received his education in Tabriz(a city in Persia) and was a disciple of Baba Kamal al-Din Jumdi. Before meeting Rumi, he apparently traveled from place to place weaving baskets and selling girdles for a living. Despite his occupation as a weaver, Shams received the epithet of "the embroiderer" (zarduz) in various biographical accounts including that of the Persian historian Dawlatshah. This however, is not the occupation listed by Haji Bektash Veli in the Maqalat and was rather the epithet given to the Ismaili Imam Shams al-din Muhammad, who worked as an embroiderer while living in anonymity in Tabriz. The transference of the epithet to the biography of Rumi's mentor suggests that this Imam's biography must have been known to Shams-i Tabrizi's biographers. The specificities of how this transference occurred, however, are not yet known. El Morya was Shams Tabrizi

El Morya ascended in about 1898 after his work with the Master K.H.(Koot Hoomi) in founding the Theosophical Society. El Morya has served tirelessly with Saint Germain in the cause of world and individual freedom, training public servants to externalize the will of God through God-government on earth.

According to H.P. Blavatsky writings There is no such Master as “El Morya.” The real Master Morya is not known by such a name or title, which apparently equates to “God Morya” or “Lord Morya,” and which was first invented by Guy Ballard of the “I AM Movement,” the earliest “Ascended Masters” group. Anyone who has read the actual letters of the actual Master M (Master Morya). will have discovered how strongly this Mahatma objects to reverential titles and terms of praise or worship.

I enjoyed every bit. The techniques and information given to me are invaluable. They are not only healing aids but also personal tools which really benefitted me. I'm grateful for this wonderful blessing and hope to do further courses very soon!