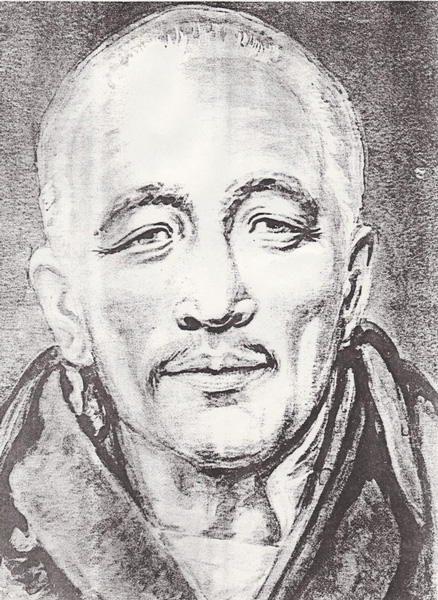 "My province in relation to the group is to give needed assistance to those who seek to fit themselves for active work as disciples. Suffice it that I am an oriental. I am on the teaching ray and closely associated with the Master KH. Part of my work is the sturdy search for aspirants of strong heart for event devotion and trained minds."

His body is not a young one and he has a Tibetan. He is very devoted to The Master KH and occupies a little house not far distant from the larger one of the master. From his willingness to serve and to do anything that has to be done, he has been called the messenger of the Masters. He has profoundly learnt and knows more about the rays and planetary hierarchies of the solar system than anyone else in the ranks of the Masters.

He works with those who heal and cooperates unknown and unseen with the seekers after truth in the world's great laboratories and with all who definitely aim at the healing and solacing of the world. With the great philanthropic world movements such as the Red Cross, he occupies himself with various pupils of different masters who can profit by his instruction and within the last 10 years, has relieved both The Master M and The Master KH of a good deal of their teaching work taking over from them, for certain stated times, some of their pupils and disciples.

He works largely too with certain groups of the Davis of the Ethers who are the healing Davis and who thus collaborate with him in the work of healing some of the physical ills of humanity. He it was, who dictated a large part of that momentous book, The Secret Doctrine and who showed to HP Blavatsky many of the pictures and gave her much of the data that is to be found in her book. (From Initiation Human and Solar, pages 57 through 58.)

He who is known as DK is planning to restore via his students, some of the old and occult methods of healing and to demonstrate:

He whom you call the master DK works much with those who heal with pure altruism. He occupies himself with those who are active in the laboratories of the world. Many of the healing angels, such as those referred to in the Bible, cooperate with him. (From The Externalization of the Hierarchy, pages 506 through 507.)

It was effective and fruitful and made sense to all my questions and concerns in me and around me.

It was truly such an amazing experience for me. It was so insightful and built such a tremendous sense of logic and compassion. Both Raj and Hargopal were brilliant.