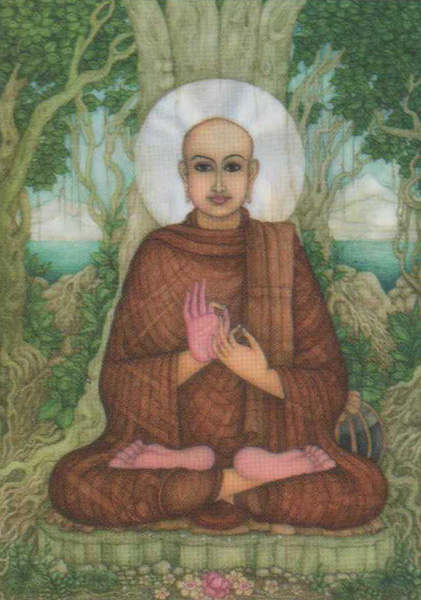 "An individual reaching the fourth initiation is known as the perfected one, or an Arhat or a Paramahamsa."

At this level, it is believed in Buddhism, one has the ability to remember all of one's past lives, and one also has various minor siddhis capable of affecting one's immediate environment.

This initiation is by far the most difficult. Yet, it also indicates a transition into realms of indescribable joy when the challenges have been surmounted. This difficulty stems from the fact that it is the soul itself that must be transcended. When this occurs, the disciple is able to fully see an aspect of him/herself lying beyond the soul. It is the highest self that is visioned, the monad. This is a most difficult task, for it demands that s/he renounce everything that was thought to be the eternal Self within. In short, it is a renunciation of the soul itself that is here required. In the Esoteric Tradition, the soul is understood as an intermediary between the monad (pure spirit) and the personality. The fourth initiation is the stage when this intermediary is no longer necessary, and must be forfeited in order to make possible continued ascent. Such a relinquishment is deeply painful, for the soul has been the guiding light for many incarnations, and was believed to be the eternal Self. Yet, at this initiation the disciple is faced with the stark realization that soul consciousness is not the end, but only a means to the end. It should also be noted that a fourth degree initiate is one who has been liberated from all previously generated karma, and that the need for further incarnation is no longer mandated. This initiation is best revealed in the life of Jesus, and Symbolically the fourth initiation sometimes called the Crucifixion Initiation.

The Arhat or Paramahamsa

The fourth initiation who is called the Arhat or the Paramahamsa is supposed to be one who does not need to be incarnated again to develop spiritually.

Between the third Initiation and the fourth there is that gulf of silence, where the disciple hangs alone in the void with nothing on earth to trust to, nothing in heaven to look to, no friend whose heart can be relied upon - nay, even the vision of the Supreme blurred and dimmed. It is symbolized by the Agony in the Garden, where the human heart cries out “If it be possible, let this cup pass away”, and still the human will arises, strong in renuncia¬tion: “Nevertheless, not my will but Thine be done”.

The attainment of this Initiation is said to involve the hardest trial in the path, after which comes the prize of the last initiation that makes him a Master of Wisdom. This is why it is sometimes compared with crucifixion and resurrection of Jesus:

Onward he passes through the stages of the Passion; sees his beloved flee; sees himself betrayed, denied, rejected, until at last, upon the cross of agony, he is held up for all men to mock at, for all men to despise; sees at last no friend, but only a ring of enemies triumphant; hears the taunt: “He saved others; himself he cannot save” - the deepest truth of all; utters at last the cry of the breaking heart: “My God, my God, why hast thou forsaken me?” and in that uttermost loneliness finds himself for evermore; losing the God without him, he finds the God within. For when the great darkness comes down, and nothing can be seen, then arises the light of the Spirit in the human heart, and then through the darkness are heard the final words of triumphant success: “It is finished”. Those are the words that ring out from the assembled hosts of Men made perfect and of Angels, when the great trial is over, and the agony of the cross is past.

He has also to experience for a moment the condition called Avichi, which means “the waveless,” that which is without vibration. The state of Avichi is not, as has been popularly supposed, some kind of hell, but it is a condition in which the man stands absolutely alone in space, and feels cut off from all life, even from that of the Logos; and it is without doubt the most ghastly experience that it is possible for any human being to have. It is said to last only for a moment, but to those who have felt its supreme horror it seemed an eternity, for at that level time and space do not exist. That appalling trial has, I think, two object--first, that the candidate may be able fully to sympathize with those to whom Avichi comes as a result of their actions; and secondly, that he may learn to stand absolutely apart from everything external, triumphant in his utter certainty that he is one with the Logos and that this overwhelming consternation, caused by the sensation of isolation from Him, is nothing but an illusion and a temptation. Some have collapsed before this terrible test, and have had to go back and begin over again their climb towards the higher Initiation; but for the man who can stand firm through its awful nightmare it is indeed a wonderful experience. . .

The fourth initiation has two marked opposing aspects--one of defeat and one of victory:

This Initiation differs from all the others in that it has this strange double aspect of suffering and victory. . . . Always at this stage there is suffering, physical, astral and mental; always there is the condemnation by the world, and the apparent failure; always there is the splendid triumph upon higher planes--which, however, remains unknown to the outer world. The peculiar type of suffering which invariably accompanies this Initiation clears off any arrears of karma which may still stand in the Initiate's way; and the patience and joyousness with which he endures them have great value in the strengthening of his character, and help to determine the extent of his usefulness in the work which lies before him.

Regarding the reality behind the symbol of "Resurrection", C. W. Leadbeater said:

It is impossible for us to describe that resurrection; all words that we can employ seem to sully its splendour, and any attempt at description seems almost blasphemy, but this much may be said, that a complete triumph has been obtained over all sorrows, troubles and difficulties, temptations and trials, and it is his forever because he has conquered by knowledge and inner strength.

The breaking through attained on this Initiation is the entering into the atmic plane--Nirvāṇa:
During the stages following the first, second and third Initiations the candidate is gradually developing the buddhic consciousness; but at the fourth Initiation he enters the nirvanic plane, and from then onward he is engaged in climbing steadily through that, or rather through that division of it, consisting of its five lower sub-planes, on which the human ego has being. This initiation is in one way a midway point, as it is usually said that seven lives are occupied on the average at normal times between the first and the fourth Initiations, and seven lives also between the fourth and fifth; but these figures are capable of very great reduction or increase, as I have said before, and the actual period of time employed is in most cases not very great, since usually the lives are taken in immediate succession, without interludes in the heaven-world.

I enjoyed it so much. I felt like a renewed person after leaving this course. Thank you so much!!

to be honest, the course increased to me more experience in my life (in general)
and specifically in Energy Healing.