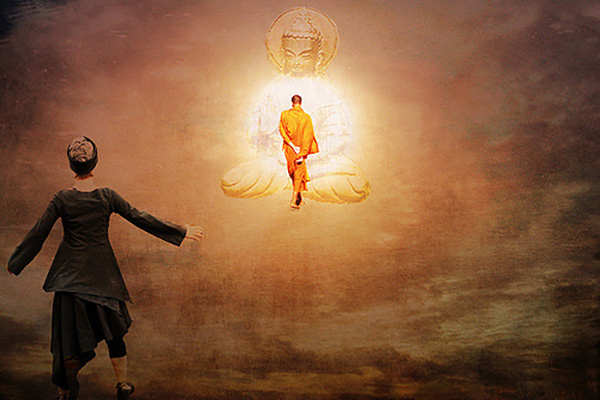 Chela is a Sanskrit word that literally means servant or slave. In Hinduism the term is used to denominate the religious student or disciple of a spiritual master or guru. In Theosophy the term is frequently used to refer to a person that has become a disciple of one of the Masters of Wisdom, being thus a candidate for initiation into the Esoteric Philosophy. Some synonyms frequently found in the Theosophical literature are "Disciple" and "Lanoo".

According to H. P. Blavatsky, Chela or Disciple is one who has offered himself or herself as a pupil to learn practically the "hidden mysteries of Nature and the psychical powers latent in man." The spiritual teacher to whom he proposes his candidature is called in India a Guru; and the real Guru is always an Adept in the Occult Science.

The period of chelaship typically involves several incarnations and a number of initiations. During this stage the aspirant will develop power and attain knowledge to become a helper of the Master's work for humanity. This is why a prerequisite to be accepted as a chela is selflessness and love for humanity. Master M. wrote:

It is he alone who has the love of humanity at heart, who is capable of grasping thoroughly the idea of a regenerating practical Brotherhood who is entitled to the possession of our secrets. He alone, such a man - will never misuse his powers, as there will be no fear that he should turn them to selfish ends. A man who places not the good of mankind above his own good is not worthy of becoming our chela - he is not worthy of becoming higher in knowledge than his neighbor.

Accordingly, the Master's attention is attracted to a person by his or her acts of service and the development of purity and selflessness. This was explained to C. W. Leadbeater in the first letter he received from Master K.H.:

To accept any man as a chela does not depend on my personal will. It can only be the result of one's personal merit and exertions in that direction. Force any one of the Masters you may happen to choose; do good works in his name and for the love of mankind; be pure and resolute in the path of righteousness (as laid out in our rules); be honest and unselfish; forget your Self but to remember the good of other people – and you will have forced that Master to accept you.

Mme. Blavatsky describes the qualifications of a perfect chela, adding that a lay chela should acquire these qualities to some extent before he can expect to be accepted by a Master of Wisdom:

From Book IV of Kiu-ti, chapter on “the Laws of Upasana,” we learn that the qualifications expected in a Chela were:

Such, at the least, must have been the recommendations of one aspiring to perfect Chelaship. With the sole exception of the first, which in rare and exceptional cases might have been modified, each one of these points has been invariably insisted upon, and all must have been more or less developed in the inner nature by the Chela’s UNHELPED EXERTIONS, before he could be actually put to the test.

Once the lay chela develops the necessary spiritual qualities to a certain extent, he or she may be put on probation by a Master, thus becoming a probationary chela. If he passes this stage successfully he can become an accepted chela. Relationship with the Master

Accepted chelas are in touch with one of the Masters and are being trained by him. However, this does not mean that they are automatically put beyond error. Referring to this, Mme. Blavatsky wrote:

What are Chelas, and what are their powers? Have they faults, and in what particular are they different from people who are not Chelas? Is every word uttered by a Chela to be taken as gospel truth? . . . Some persons have gone so far as to say that when a man is a Chela he is at once put upon a plane when each word that he may unfortunately utter is taken down as ex cathedra, and he is not allowed the poor privilege of talking like an ordinary person. If it be found out that any such utterance was on his own account and responsibility, he is charged with having misled his hearers. Now this wrong idea must be corrected once for all.

What a chela writes or says, therefore, comes from his own understanding, except in rare occasions:

It may happen with them, as it does with any author occasionally, that they evolve either true or beautiful utterances, but it must not be therefore concluded that during that utterance the Guru was speaking through the Chela. If there was the germ of a good thought in the mind, the Guru’s influence, like the gentle rain upon the seed, may have caused it to spring into sudden life and abnormally blossom, but that is not the master’s voice. The cases in fact are rare in which the masters speak through a Chela.

The influence of the Master on the disciple is a natural result of the close connection that gradually grows between them, and this influence is reciprocal. In the words of Master K.H.:

It is a familiar saying that a well matched couple grow together, so as to come to a close resemblance in features as well as in mind. But do you know that between adept and chela—master and pupil—there gradually forms a closer tie; for the psychic interchange is regulated scientifically, whereas between husband and wife unaided nature is left to herself. As the water in a full tank runs into an empty one which it is connected with; and as the common level will be sooner or later reached according to the capacity of the feed pipe, so does the knowledge of the adept flow to the chela; and the chela attains the adept level according to his receptive capacities. At the same time the chela being an individual, a separate evolution, unconsciously imparts to the master the quality of his accumulated mentality. The master absorbs his knowledge. . .

It is important to keep in mind that the training a chela undergoes does not necessarily resemble the common idea of training. For example, it does not involve a constant conscious communication with the Master, where the disciple is always guided by him and told what to do or not to do.

In fact, the Chela is an unfortunate man who has entered upon a path not manifest, and Krishna says that “that is the most difficult path.” Instead of being the constant mouthpiece of his Guru, he finds himself left more alone in the world than those who are not Chelas, and his path is surrounded by dangers which would appall many an aspirant, were they depicted in natural colours, so that instead of accepting his Guru and passing an entrance examination with a view to becoming Bachelor of the Art of Occultism under his master’s constant and friendly guidance, he really forces his way into a guarded enclosure, and has from that moment to fight and conquer—or die.

A similar statement can be found in a letter from Master K.H.:

We never guide our chelas (the most advanced even); nor do we forewarn them leaving the effects produced by causes of their own creation to teach them better experience.

According to C. W. Leadbeater the stage of accepted disciple includes two degrees--"Acceptance" and "Sonship". During the acceptance the astral body and mental body of the disciple are brought into union with those of the Master. The stage of Sonship involves the union of the causal body also:

We have already spoken of the close relation between an accepted pupil and his Master; all the time this intimacy has been steadily growing, and it usually happens that when the pupil is approaching the portal of Initiation the Master considers that the time is ripe for Him to draw the chela into a still deeper union. He is then called the Son of the Master, and the link is such that not only the lower mind but also the ego in the causal body of the pupil is enfolded within that of the Adept, and the latter can no longer draw a veil to cut off the neophyte.

It was a wonderful course. The content was so rich and practical. I already knew some of the information given in the course, however the way it was taught in the course was more practical and I am more likely to apply it in this form. I was also fascinated by the 7 rays. The insights given made me understand myself and the most important people in my life. It seems easier to create peace and harmony in my life with this knowledge and understanding. I knew there are ups and downs in life and it is a part of our journey, but having the wisdom of the cycles is very enlightening and very helpful. Thank you for this amazing course packed with lots of knowledge and easy to use practices.