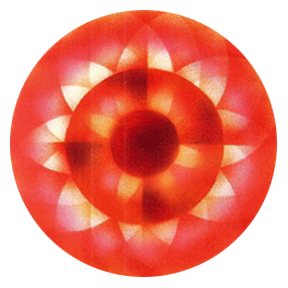 The basic chakra is located at the base of the spine or coccyx area. (Master Choa Kok Sui, Advanced Pranic Healing)

The basic chakra or Mooladhara chakra has four petals and contains red and orange pranas. It also contains a very minute amount of unnoticeable yellow prana.

Located near the base of the spine is the kundalini energy. (Master Choa Kok Sui, The Spiritual Essence of Man)

The Kundalini energy is the energy that is responsible for the manifestation of matter. Without it, the physical body as well as the physical universe cannot exist.

The Kundalini energy is called by many names: the “serpent fire,” “fiery serpent” or the “sacred fire.” From this, it is possible to understand John the Baptist's statement (Matthew 3:11, Oxford Bible), “I baptize you with water . . . but one who is more powerful than I is coming after me . . . He will baptize you with the Holy Spirit and fire.” The Holy Spirit symbolizes the divine energy that is coming down. The fire symbolizes the fiery serpent located near the base of the spine. It is through divine energy that the dormant, yet powerful, Kundalini energy is awakened. However, it is not a matter of whether it is awakened or not, but rather the degree of awakening.

The quality of the physical body, especially the brain and the nervous system, is improved or upgraded. After a certain period of time, a person whose Kundalini is highly awakened may become a genius, a great charismatic leader or a great spiritual teacher. (Master Choa Kok Sui, Achieving Oneness with the Higher Soul)

The basic chakra or Mooladhara chakra is the center of self-preservation or instinct of self-survival. (Master Choa Kok Sui, Pranic Psychotherapy)

The practice of one's profession involves survival. The basic chakra is not only the center of self-survival, but it is also the center of dynamic activities. A dynamic executive or somebody who is successful in business tends to have a highly activated and energized basic chakra. A person with a small and depleted basic chakra has a tendency to make plans, but not to implement them. He also tends to procrastinate or keep things on hold. The basic chakra needs to be treated because it is the chakra of action.

The basic chakra or Mooladhara chakra controls and energizes the bone marrow; therefore, it affects the production of the blood and the quality of the blood produced.

The heart is basically made up of muscles. The basic chakra, which controls and energizes the muscular system, also affects the physical heart.

SOME CONDITIONS AS A RESULT OF A MALFUNCTIONING BASIC CHAKRA

Some people with underactive and depleted basic chakra tend to be sluggish, impractical and unrealistic. In some severe cases, they tend to be completely out of touch with physical reality. (Master Choa Kok Sui, Advanced Pranic Healing)

If a person has problems in finding a job, in work performance, or in business, the basic chakra should be treated. (Master Choa Kok Sui, Pranic Psychotherapy) Persons who, in spite of their qualifications and their relatively good health, have difficulty in getting a job, have partially depleted and underactivated basic chakras.

There was a man who, at one point in his life, had mounting financial debts. When his basic chakra was scanned, it was depleted and underactivated. After several Pranic Healing treatments, his work performance and productivity improved in a matter of one to two months. Not long after, he was promoted to a higher position, thereby making it possible for him to earn a higher income and to solve his financial problems.

In Chinese medicine, it corresponds to the acupuncture point DU (GV) 1. (Master Choa Kok Sui, The Spiritual Essence of Man)

TAOIST, INDIAN AND KABBALISTIC CORRESPONDENCE OF THE BASIC CHAKRA

In Taoist yoga, the basic chakra corresponds to Chang giang, which means “abundance in strength.”

The Sanskrit term for the basic chakra is “Mooladhara chakra.” Its correspondence in Tamil (Southern India) is Putti kaalam.

The basic chakra, in the Indian tradition, is symbolized by an elephant. This is why in the Taoist tradition it is called “abundance in strength.”

In Kabbalah it is called Malkuth. The divine name of Malkuth is Adonai Malkuth.

Is so easy way for cleansing & healing the chakras than hands in basic, advance & pcychotherapy .. so those three can be in crystal healing in easiest way

Very fullfill experience.Teavcjing method was simple but clear and easy to understand..First time in so many years,I didn't touch my cellphone for long time..